Dive into the water world of Pula Aquarium

The Aquarium of Pula shows the richness of the Adriatic Sea combined in a unique way with the centuries long military history of this coastal town in Istria. The aquarium is settled in the 130 year old fortress Verudela, part of the once mighty Austro-Hungarian defence compound Fortress Pula. Today, the fortress is inhabited by 100 species of north and south Adriatic fish, 50 species from tropical seas and fresh waters, as well as fish from Croatian rivers and lakes.

There are sea turtles recovering in the rehabilitation centre, along with an albino Gourami, Horseshoe crab (a living fossil), coral reef sharks, big rays and groupers, scary muraenas, timid mullets and all the other animals that have found their home in rooms, hallways and tunnels once used by soldiers.

The Adriatic exhibition is displayed on the entire ground floor and part of the first floor of the Aquarium.  Among the economically important and less important fish, crustaceans and molluscs, you can find animal species that you wouldn’t even consider living organisms, but they complete the experience and add to the richness of colours and shapes in the Adriatic display of the Aquarium.

The Mediterranean exhibition is located on the first floor of the Aquarium, where animals that are rarely or never seen in the North Adriatic reside. They prefer slightly warmer sea temperature, and therefore are more often found in the South Adriatic, or the warmer Mediterranean, respectively. The biggest fish are usually the first to draw attention, so the Dusky grouper with its big mouth, the snake-like Muraenas and the sharp-toothed Trigger fish are quickly noticed by most visitors. The Mediterranean is filled with a variety of colourful fish resembling those found in the tropical seas, like the Swallowtail sea-perch, Cardinal fish, Boar fish, Spine fish and Ornate wrasse. It is also important to mention a newcomer to the Mediterranean, the Guinean puffer, whose presence in the Aquarium emphasizes the problem of invasive species entering the Mediterranean in ever-increasing numbers.

The Tropical Marine exhibition is divided over seven tanks with an overall capacity of 15.000 litres of water and presents a world completely different from the sea-life in the Adriatic Sea. It is a world dominated by colours and shapes – the rich ecosystem of tropical seas and coral reefs. Here you can see a variety of fish species and other organisms; from the stationary anemones and restless, lively little fish, to sharks. Sharks, obviously the most interesting fish to the majority of our visitors, make it clear by their size and appearance that they occupy the top of the coral reef food chain.

In the exhibition of Croatian river and lake fish you will find native and non-native species of fish from Croatia’s rivers and lakes. Croatia is a country with an exceptionally rich freshwater fish fauna and stands on top of Europe with the biggest percentage of endemic fish.  The different species of fish vary in size, so you can see fish smaller than 1cm, as well as fish bigger than 50cm and still growing. One curiosity is the life cycle of the eel, that in order to reproduce swims across the entire Atlantic Ocean to get to the Sargasso Sea. We should also mention the bighead carp, which looks like it has been turned upside-down, because his eyes are located beneath his mouth, but that is actually an adaptation to a plankton-eating lifestyle. 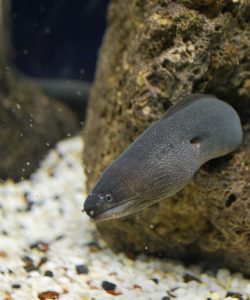 Dive into the water world of Pula Aquarium