Arboretum of Trsteno near Dubrovnik

Trsteno Arboretum, is the oldest arboretum in this part of the world

The Trsteno Arboretum is located near Dubrovnik, in the small municipality of Trsteno, and covers an area of 25.5 ha. It was established by the end of the fifteenth century as a park and summer residence of the patrician family Gučetić (House of Gozze), they asked ship captains to bring back seeds and plants from their travels.

The Arboretum reserves a very special place among the old Ragusan, Dalmatian and Mediterranean parks due to its five-century-long continuous development from Gothic-Renaissance, Renaissance-Baroque and Romantic forms to the present. It includes a Gothic-Renaissance park surrounding the fifteenth-century summer residence, which is a monument of garden architecture, and the nineteenth-century neo-Romantic park at Drvarica. Its collection of exotic and decorative trees and shrubs includes over 300 species and cultivars. As early as 1492 a 15m span aqueduct to irrigate the arboretum was constructed, and this aqueduct is still in use.

Trsteno suffered extensive damage and looting during the Croatian War of Independence when on October 2 and 3rd, 1991, the Yugoslav People’s Army launched a series of gunboat and air attacks and set the Arboretum afire, destroying a large part of it, and causing partial damage to the summer residence and the oldest part of the arboretum. The arboretum was further severely damaged in 2000 by a forest fire during a drought, when around 120,000 square meters were lost in fire.

The pride of the arboretum, two Oriental Planes located on the central market place of Trsteno, survived both disasters undamaged. They are over 500 years old and are unique specimens of its kind in Europe. The ancient trees are both about 45/60 m tall and their trunks are 5m in diameter.

Due to it’s closeness to Dubrovnik and under that town’s permanent control, Trsteno was a favoured spot for the nobles to place their summer homes. About 300 estates have been found in this area and about 70 Renaissance villas are somewhat preserved with about 20 in reasonable shape. Most were built during the 16th century after the 1520 earthquake. The 20th century saw the demise of most of Dubrovnik’s estates as urban growth devoured land near cities. Many that survived were attacked during the 1991 war. If anything is left, it’s typically the house itself, not the gardens. Trsteno’s garden/arboretum is alone in being protected as a complete complex.

Dubrovnik’s landscape architects would typically provide a single path instead of Italian boxwood hedges, they would use stones to create walls of various heights. At the edges are the highest walls to make the garden look inward — except on the sea side, where, of course, the sea view is highlighted with a belvedere. The gardens offers pleasant smells with aromatic citrus plants and herbs being favourites and useful in the kitchen. After WWII, this estate was confiscated by the communist regime. Eventually it was placed under the control of the Yugoslav (and later Croatian) Academy of the Sciences and received modern scientific management.The communists were not the first to discourage the wealthy from holding elaborate estates. At its peak, Dubrovnik banned excessive luxury and the flaunting of wealth through extensive gardens.

From here a path drops you down to the main entrance to the arboretum, where Gucetićs former villa overlooks the oldest part of the estate, a typical Renaissance garden in which patches of lavender, rosemary, oleander, bougainvillea, myrtle and cyclamen. A nearby orchard sports grapefruit and mandarin trees, but beyond here the garden has a wonderfully lush, uncontrolled feel, as pathways begin to lose themselves in a dense woodland environment comprising trees from around the world. Amidst it all, a trident wielding statue of Neptune overlooks a pond packed with goldfish. Running north-west from the villa, an avenue of palm trees leads to yet more semi-wilderness areas, thick with cypresses and pines.

Trsteno is relatively easy to get to, with Dubrovnik–Split buses dropping off and picking up in the centre of the village.
Standing by the roadside just next to the bus stop is a majestic pair of 400-year-old plane trees, some 50m high and 15m in circumference. 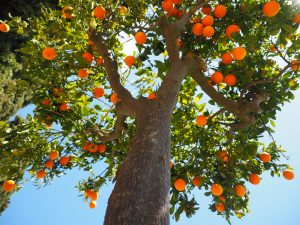 Arboretum of Trsteno near Dubrovnik

Trsteno Arboretum, is the oldest arboretum in this part of the world