An Arboretum is a plantation of various domestic and foreign trees and shrubs that serves scientific, breeding and decorative purposes, but mostly for studying the biological characteristics and ecological relationships of trees and shrubs. An Arboretum is a park where  mostly mostly woody plants are represented, and is presented in the form of a public park or combined with a botanical garden.

Croatia has three Arboretum: Arboretum Trsteno near Dubrovnik, arboretum Lisičine in the village Lisičine kraj Voćina in Slavonia and arboretum Opeka, located about 20 kilometres north-west of Varaždin in the town of Vinica. The arboretum in Trsteno was partly destroyed in a great fire during the war of the eraly ’90 and later by a forest fire in 2000. The Arboretum Lisicine is very young as it was founded in 1963 so is not of great historical and dendrological value. Therefore, arboretum Opeka is today the most important and richest arboretum in Croatia .

Arboretum Opeka is visited by tourists from all over Croatia and abroad – it is a beautiful park, with exquisite work of horticultural endeavours. It covers an area of 64 hectares and is – in view of the landscape elements – divided into two parts:
1) Lower part
Designed by the principles of garden art on the model of English parks, with an abundance of diverse flora
2) Upper part
The hills in the park are designed as a park forest a dense natural forest

The park was created in the 19th century and is dominated by a Baroque idea of the classic English garden. It was made according to the design of Dutch experts and today it is impossible to compare the castle and park of Opeka to other parks with mansions, because it is a unique example of garden architecture and has the highest aesthetic value and dendrological diversity.  The arboretum has more than 800 different species of trees, shrubs, climbing plants and flowers.

After the wars with the Turks, during the feudal period in Croatia, the first traces of capitalism began to be seen by the building of castles and villa’s with gardens modelled to foreign models, but in a more modest scale. In those days the style of English parks were fashionable, and so in Croatia many parks were created on that base, including the Park Arboretum Opeka.

In the years of the 1860’s the beginning of the formation of the park according to English models was started, with the planting of exotic trees,  which are now over 200 years old.
The ‘Bricks Castle’ was built in the Baroque style and is located in the middle of an arboretum. However, the castle was repeatedly rebuilt and upgraded and has lost all historical and architectural value. In 1947 the park around the castle was declared a protected natural rarity, and in 1961 the monument of garden architecture – arboretum. 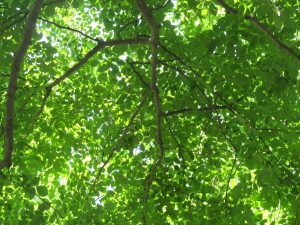