The Zrinski castle in Čakovec

The Castle of Čakovec was build by the Croatian viceroy Nikola Zrinski, when he took the territory from Hungary in 1546. He build a residential palace within the fortified walls of a medieval fortress that stood in the centre of the town of Čakovec. The original 13th century fortress was build by Count Dmitri Čak, with the so-called Čak-ov tower, giving the town it’s name (Csákyturn) Čakovec. The original tower was made of wood and still stands in the old castle. The Zrinski family and the fortress held out against the invading Turks, but during a revolt by the Zrinski and Frankopan families for independence from the Austria-Hungarian empire the castle did not hold out. In 1691 the last Zrinski died at the Čakovec castle, and the region was overrun by the imperial Austrian army form Vienna.

The Museum of Medimurje and Čakovec is located in the Castle of Čakovec, also called Zrinski Castle. The museum show a collection of art and traditional folk items ranging form early Roman times to the 1800’s and military exhibits from the 20th century. Some special items are a complete apothecary, an early telescope, antique furniture and cloths. In the courtyard of the castle a restaurant is located and surrounding the castle is a green park. 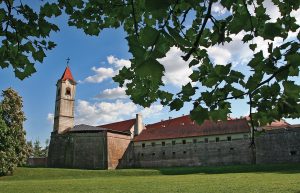 The Zrinski castle in Čakovec