The cathedral of St. Domnius in the palace of emperor Diocletianus

The Cathedral of Split on the Dalmatian coast is the seat of the Archdiocese of Split-Makarska, it is a complex of a church, formed from an Imperial Roman mausoleum, with a bell tower – strictly the church is dedicated to the Virgin Mary, and the bell tower to Saint Domnius – and together they form the Cathedral of St. Domnius.

The Cathedral of St. Domnius, consecrated at the turn of the 7th century AD, is regarded as the oldest Catholic cathedral in the world that remains in use in its original structure, without near-complete renovation at a later date (though the bell tower dates from the 12th century). The structure itself, built in AD 305 as the Mausoleum of Diocletian, is the second oldest structure used by any Christian Cathedral. Diocletian’s Palace is a building in the centre of Split, built for the Emperor Diocletian (a native of Dalmatia) at the turn of the 4th century.

The cathedral was named after Saint Domnius – the patron saint of Split – who was a 3rd century Bishop of Salona. Salona was a large Roman city serving as capital of the Province of Dalmatia, today it is located near the city of Solin. Saint Domnius was martyred with seven other Christians in the persecutions of the Emperor Diocletian. He was born in Antioch, in modern-day Turkey, and beheaded in 304 at Salona.

The Cathedral of St. Domnius is composed of three different sections of different ages. The main part is Emperor Diocletian’s mausoleum, which dates from the end of the 3rd century. The mausoleum was built like the rest of the palace with white local limestone and marble of high quality, most of which was from marble quarries on the island of Brač, and with bricks made in Salona and other factories. Later, in the 17th century a chorus was added to the eastern side of the mausoleum. The Bell Tower was constructed in the year 1100 AD, in the Romanesque style. Extensive rebuilding in 1908 radically changed the Bell Tower, and unfortunately many of the original Romanesque sculptures were removed.

One of the best examples of Romanesque sculpture in Croatia, are the wooden doors on Cathedral of St. Domnius – made by the medieval Croatian sculptor and painter Andrija Buvina around 1220 – they show fourteen 14 scenes from the life of Jesus Christ, separated by rich ornaments in wood.

On the first floor of the sacristy is the cathedral treasury which contains relics of Saint Domnius, which were brought to cathedral after his death. Treasures include sacral art works, like the Romanesque The Madonna and Child panel painting from the 13th century, objects like chalices and reliquaries by goldsmiths from the 13th to the 19th century, and mass vestments from the 14th till 19th century. It also contains famous books like the Book of gospels from the 6th century, the Supetar cartulary (collections of original documents bound in one volume) from the 11th century, and the Historia Salonitana (The History of the people of Salona) by Toma the Archdeacon from Split in the 13th century. 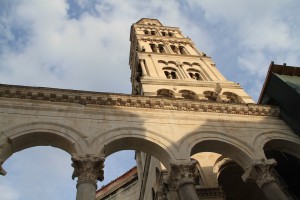 The cathedral of St. Domnius in the palace of emperor Diocletianus