The island of Brac with it's famous beach near Bol!

Island Brac is about 40km long and 15 km wide and has a most interesting geological structure. At several locations on the island the limestone hills have large holes, deep ravines and fissures. On other sites a hard white stone is the basis, and this stone has been quarried since ancient times. It is a very popular building material, and was used by the Romans for the Cathedral in Sibenik and it is even used in the White House in Washington. The Roman mines are still visible on the island Brac near Pucisca, and in the village of Selca stone workers can be seen in action.

Part of the island is covered with forest, and the best beaches can be found near the village Supetar, where the ferry from Split lands. However, the most famous beach is ‘zlatni rat‘ or golden cape near Bol at the Southwest coast of the island. Depending on the tide the beach changes it’s shape, also a popular site for windsurfing. In and around Bol there is plenty to see and do. The town has a church with beautiful paintings and a monastery. A two hour walk brings you from Bol to the highest peak (778m) of the Dalmatian islands, the St. Vitus mountain (Vidova Gora). 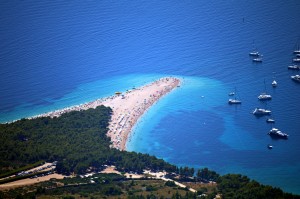 The island of Brac with it's famous beach near Bol!