NP Brijuni in short: NP Brijuni comprises of two islands off the coast of the Istrian peninsula on the northern coast of Croatia. The largest island is open to visitors, buy your entrance ticket to the island in the town of Fažana. The ticket fee includes the short ferry boat trip to the island and a ride with a tourist train around the main parts of the island. Hop of the tourist train for a

visit to the small zoo and walk around the island on tarmac roads, rent a bike or a golf cart to explore the island further. Have a nice coffee or lunch in one of the hotel restaurants. Visit the museum and learn about the rich history of the island dating from Roman times to the current era when heads of state have used the facilities. Cultivated Mediterranean nature, forests, old oaks and olive trees and wild deer to be seen up close. Worth a visit an guaranteed an perfect day out with lots of diversity form nature, activity, wild and zoo animals, search for the dinosaur tracks on the beach, Roman ruins, and so on. 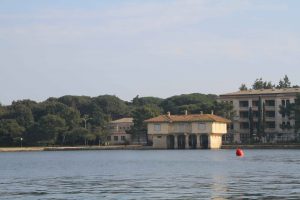 The Brijuni national park consists of a total of 14 islands and islets along the Istrian peninsula on the northern coast of Croatia. Only the largest island – Veli Brijun – is open to visitors. In the coastal town Fažana, about 7 km north of the city of Pula, you can buy your entrance ticket to the park. The ticket includes the short ferry crossing (3 km) to the island and a tour with an electric train to the main sights of the island. It is not possible to visit the island by car. Along the way your tour guide will give more information about the sites and the you will be given the opportunity to step out the train to visit some of the locations by foot, such as the church and museum near the harbour and the little Zoo, here you get a short break and at a kiosk you can buy something to drink or an ice cream while walking through the Zoo. If you have time you can take a walk around part of the island along the paved roads, or rent a bike or golf cart to explore the island further. There are several restaurants and hotels on the island for a snack, drink or overnight stay. Visit the museum and church and learn about the rich history of the island dating from Roman times to the present era in which heads of state have used the facilities. Mediterranean nature, forests, ancient oaks, olive trees and deer can be seen from close up.

History
National park Brijuni has been known as the place for luxury accommodation since Roman times. The island group came in private possession of Paul Kupelwieser, an Austrian industrialist in 1893. Malaria was endemic on the islands and also Kupelwieser himself suffered from malaria disease. In 1900 he asked the well-known microbiologist Robert Koch to make the island malaria-free, which was achieved by him within two years. Kupelwieser invested multiple times the purchase price in renewing the infrastructure including a port, a submarine water-pipe from the mainland to Veli Brijun, luxury hotels, and restaurants. Now, that these facilities were present many visitors came to the island, including archaeologists who excavated many ancient Roman settlements, there was an ostrich farm as ostrich feathers were fashionable in that period of time and there were also patients from Viennese psychiatrists who sent them to Brijuni to heal on this peaceful, luxurious green island.

In 1906, the Austrian imperial family discovered the island for relaxation and recreation, and Archduke Maria Josepha and her children were the first of the family to visit, followed by, among others, Archduke Franz Ferdinand. The archduke used the beautiful island as a venue for state visits, like for a meeting with Emperor Wilhelm II, the last German Emperor of Prussia. Paul Kupelwieser’s wife was buried in 1915 in a specially built mausoleum on the island, but Paul Kupelwieser who died in Vienna in 1919 was buried in Vienna’s cemetery. The son of Paul Kupelwieser, Karl (1872-1930) continued his father’s work. He made a casino, the first 18 hole golf course in Europe and facilities for playing polo. After the death of Karl Kupelwieser, the island group came under control of Italy in 1936, as Istria belonged to Italy at the time.
After World War II, Brijuni became part of Yugoslavia and President Josip Broz Tito made Brijuni his personal state resort, where he also received many famous international heads of state, film stars and other celebrities.

This natural park is definitely worth a visit, a guaranteed day out with a lot of diversity in nature, activities, wildlife and zoo animals, searching for the dinosaur tracks on the beach and many Roman ruins. 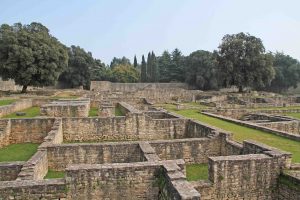 Flora
No unspoiled wildlife, but cultivated nature that is very surprising and beautiful. The vegetation in NP Brijuni is typical Mediterranean with old oak trees, olive trees, laurel, rosemary and privet, but there are also many imported species of trees such as pine trees, cedars and spruces. In NP Brijuni, there are even a number of plant species that belong to the endangered species of Istria, such as marine poppy, wild cucumber, and some grasses that grow freely here. The abundance of flora makes the island a green oasis surrounded by white stone beaches, in which dinosaur tracks and other fossils can be found, in the midst of the beautiful blue Adriatic sea.

Fauna
The surprising thing is that in NP Brijuni besides native animal species such as pheasants, squirrels, axis- and fallow deer, and moeflons there are also many exotic animals. These animals were previously donated by foreign heads of state to then President Josip Broz Tito, who had his summer residence at Brijuni.
Especially on parts of the island that are not often visited, you can see all kinds of insects, reptiles and birds. Here you can also see deer and moeflons grazing on the grasslands located next to the green forests.
Most bird species reside on the closed off NP Brijuni, and on the surrounding islands, there are also many migratory birds, and here they find a place and unique habitats for resting or breeding.
The sea around the islands of NP Brijuni, which also belomgs to the national park, is not accessible without a license. Previously excursions were organized to these areas, but in recent years this is no longer possible.

The seabed of NP Brijuni is rich in various types of sponges, shellfish, sea urchins, fish, dolphins and sea turtles. In seawater of NP Brijuni species have been found that were never seen in the Adriatic Sea, as well as some species that were unknown to scientists, such as the soft coral Alcyonium brionic or a variety of Ircinia variabilis fistulata sponges.

Where to buy tickets?
The entrance tickets for a visit to NP Brijuni are for sale at the national park office in the coastal town of Fažana, Brionska 10, which is near the quay where the ferry goes to Veli Brijun Island. Included in the entry fee are the ferry crossing from Fažana to Veli Brijun, a tour with an electric tourist train and guided tour (in Croatian, English, German, Italian or Russian) over the island along the highlights, this tour takes about 3 hour. The crossing to NP Brijuni is every one to two hours.
Please note: especially during the high season of July and August, there is a lot of interest in the tour of NP Brijuni and at a time the tour is only in one language. If you want to go with the English tour, you have to buy your tickets in advance.

Where to eat?
On the island there are several restaurants where you can eat, such as Galija, Plaža, Školjka restaurants, Neptun restaurants and Venera in Hotel Neptun, Karmen restaurant in Hotel Karmen.

Where to sleep?
Hotels Neptun and Karmen are located at the port where you arrive by ferry on the island Veli Brijun, while Lovorka, Primorka and Dubravka villas are a little further away from the harbor, namely in Lovorika Bay. You can book your accomodation via the website of the National Park. 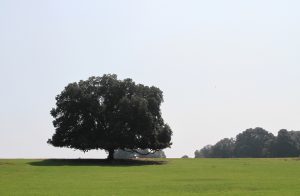