Visit the stork village Čigoč in this magnificent marshland which offers plenty of activities!

There is plenty to see and do in and around the marshlands of Lonsjka polje – you can go walking, cycling (you can rent bikes locally), make an organized boat trip or rent a canoe, go bird-watching and visit the ethno-villages.

Cigoc is the European White Stork Village
Located on the right bank of the Sava River, along the Tišina oxbow Cigoc is a small traditional village. The area is surrounded by meadows and pastures, ponds and pools where the storks can find plenty of food (frogs, snakes, insects, snails, crustaceans and fish) to feed their young ones. In this village the migratory white stork has adapted itself to living with the people by building their nests on the rooftops of the houses. Due to the large number of stork nests on the roofs of the wooden Posavina-style houses, Čigoč was proclaimed the First European Stork Village in 1984.

Krapje the Architectoral Heritage Village
The houses here still show the original design, decoration in the traditional wooden architecture and all this a picturesque setting of a linear build village along the road. Not only houses but also public buildings like the church, mill, tavern, fire station and vicarage are build in traditional architecture.

The Posavac circular Trail provides you a comfortable stroll lasting two or two hours and a half for a little over 4 km long and has five information boards. On the way,
you can discover how the people, while making use of their ploughland, meadows and pastures, nevertheless left the door open to the wild. The trail tells of the characteristics of this floodplain area and the traditional livestock farming on the pastureland, where there is also a lookout tower for bird watching and for observing the domestic animals grazing freely. The story ends by showing the way in which traditional farm products today make a unique gastronomical range available in Posavina tourist farms. You can best start this circular educational walking trail at the Information Centre in Čigoč no. 25, where you will get all the advice you need about which direction to start off in.

Borderers’ Trail starts off from the village Krapje and heads towards the Orlinci pastures, and you will need two and a half or three hours of easy walking to complete this trail. The Orlinci pastures are grazed freely by the foundation stock of the today critically endangered Slavonian-Podolian cow. However, do not approach the herd within the fencing be careful and keep enough distance from the herd. The trail continues on to the biggest nesting site of spoonbills in Croatia, the Krapje Đol Ornithological Reserve. In historical times the Military Frontier ran along this area – the border between the Austro-Hungarian and the Ottoman Empires. Today, along the trail, two replicas of ancient wooden guardhouses on stilts, or chardaks, have been placed, reminders of the unsettled life of the Military Frontier.

The Tena’s Trail forest educational walking trail runs at the borders of the Park by the village of Piljenice – not far from the Vaclavek Mill and the Lipovljani Fishpond. The name Tena is derived from a book written by the forester and Croatian writer Josip Kozarac. Tena’s Trail is a circular walking trail only 2,5 km and along the path are 16 educational boards (in Croatian and English language) explaining about the typical lowland common oak and European hornbeam forest. The path is located on a dike – a micro-elevation – and is thus outside of the area affected by flooding.

The Old Oak Path walking trail (near Muzilovcica) – is accessible on foot only when the plain is not inundated, the trail is unmarked due to recurrent flooding of the area. It is a circular trail of 12 km which takes about two and a half hours of walking. A part of the trail goes through a typical riparian forest of oak trees and narrow-leaved ash. The most interesting part of the trail is where there is a striking oak tree that experts estimate to be 500 years old. After that, the trail passes through extensive pastures, where there are attractive shade areas at which you will see large numbers of animals at rest – cattle as well as the landraces the Posavina horse and the Turopolje pig. The place for a truly unique photo-safari. The final part of the trail passes by the borrow pits, a paradise for fishing (get a permit!), at which you can also see masses of waterfowl like white stork, grey heron, little egret, great egret, purple heron and many more.

Prepare your visit to the park and bring at least the following items:

• hiking shoes – due to the watery environment
• long-sleeved shirt and long trousers – to protect against mosquitoes
• anti-mosquito preparation
• cap, hat or sun-shield – for walking in the open
• bring enough water and food as there are not many shops around

Bicycle routes
Lonjsko Polje and the surrounding area is great for cycling, as there are no elevations it is relatively easy and great for families, you can also rent bikes locally. The diverse cycling trails have signposts and at several places pick-nick tables are set.

1. The Sava National Route (the Posavina route)
A great cycling route in the national park with beautiful nature, ancient wooden Posavina-style architecture, great opportunities to get to know local traditions.
– In short the route runs along the county road Ž-3209, where it follows the left hand bank of the Sava River for about 78 km. The start is below the walls of Sisak Burg, than crosses the Lonsjko Polje NP boundary in Čigoč, the European Stork Village and follows through typical Posavina villages like Mužilovčica, Suvoj, Lonja and Krapje, Village of the Architectural Heritage – after Drenov Bok it passes through the settlement of Jasenovac and heads on to the city of Novska, where it joins the SMC 1 route (see below).

2. Route SMC 1
A cycling route of about 114 km along roads which is less suitable for children as traffic along the Popavaca – Novska section can be quite heavy. Apart from that is is a beautiful route through vineyards, along rivers and small villages.
– In short the route goes along national road D-36 from Sisak, and county road Ž-3249 via Popovača, Kutina, Lipovljani and in Novska switches onto national road D-47 in the direction of Jasenovac, Hrvatska Dubica and Hrvatska Kostajnica. This route links Posavina with Pounje across Moslavina. In Popovača and Kutina it is possible to switch into the network of Moslavina bicycle routes that go over attractive wine roads where you can have the chance to taste the famed Moslavina Škrlet, an indigenous white. From Jasenovac, the route runs from the confluence of the Una and the Sava along a road that passes through the villages along the left bank of the unique, clean Una River, where you can halt at any moment to refresh yourself.

3. Route SMC 2
– in short, this 80 km long route links the town Sisak via national road D-224 with Hrvatska Dubica via the town of Sunja. As you cycle through villages like Staza, Papići, Šaš and Živaja, you can turn off the route for a bit and enjoy in the pleasures afforded by Sunjsko polje (fields of Sunja). When you are in this area in the middle July don’t miss the Horse Breeding Show in Sunja with the best horses of the Croatian breeds Posavac and Draught horses.

4. Local Route LPNP 1
– This short 24 km long cycling route starts in the village of Kratečko, crosses the river Sava and then on towards Sunja, linking Lonjsko Polje with Sunjsko polje (Route SMC 2). In order to cross the Sava you have to embark on a traditional ferry, which gives an extra dimension to this route. This ferry, which can carry 24 tons, is propelled to the other side by the current itself, and all the details about the uncommon ride that awaits you will be provided by the friendly ferryman. After you have crossed over to the right bank of the Sava, you will come into the hamlet of Sunjsko Selišće, and then, along the valley of the Sunja Stream, you will arrive in Sunja along a local road.

5. Local Route LPNP 2
– This very short route 12 km long route links the Sava National Route (the Posavina Route) with Route SMC 1. Starting off from Krapje, Village of the Architectural Heritage, it goes over a bridge across the Veliki Strug Canal, which is of particular importance, because it is directly connected with the Sava, and is used to take the flood waters when the river is high directly into Lonjsko Polje. This is of course essential for the spawning of fish, and today the Strug is a very well known destination for fishers. From the village of Plesmo, the route goes through the lowland riparian forest of Rastina, and via the villages of Stara Subocka and Nova Subocka links up with Route SMC 1.

6. Local Route LPNP 3
– This 29 km long route near the European Stork Village Čigoč links the Sava National Route (the Posavina Route) with Route SMC 1 (the Moslavina section). It sets off from the village of Gušće in the direction of the village of Veliko Svinjičko, and then from the village you come out onto a forest road (5.5 km long) that runs along the embankment of the Lonja Stream at national road D-36. The route goes through the village of Stružec, once the highest-yielding oilfield in Croatia, and here for the first time you’ll meet a slight climb, which is a sign you are coming close to Osekovo, in other words, the foothills of the Moslavina Hills. Those who know the Park well claim that it is precisely from Osekovo that there is the finest panoramic view onto the wide expanses of Lonjsko Polje. The route continues through the village of Donja Gračenica and then via Gornja Gračenica connects up with route SMC 1. Don’t miss out on a visit to the Chapel of SS. Fabian and Sebastian in Donja Gračenica – a jewel of wooden architecture, and one of the few specimens of the wooden religious architecture of Moslavina still in existence.

7. Local Route LPNP 4
– This route touches on four rivers, the Sava, Trebež, Pakra and Ilova, is 20 km long and passes through the heart of Lonsjko Polje and joins the Sava National Route (the Posavina Route) with Route SMC 1. It goes long an gravel road (7.5 km long) from the village of Trebež to Kraljeva Velika. On this route you can enjoy the mysterious atmosphere of the centuries-old lowland riparian forests that were described so vividly in his books by writer and forester Josip Kozarac, who spent ten years of his life here as warden of the Lipovljani Forest Administration. It goes on through the village of Piljenice, picturesque village that straggles along the natural course of the Pakra River and Lipovljani Fishpond. Here it crosses the A3, and then joins up with Route SMC 1 via Ilova village.

Entrance tickets
Entrance tickets to the park can now also be purchased via the official webshop of Croatian parks, with reduced prices when you visit more days and for students. 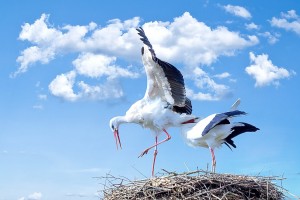